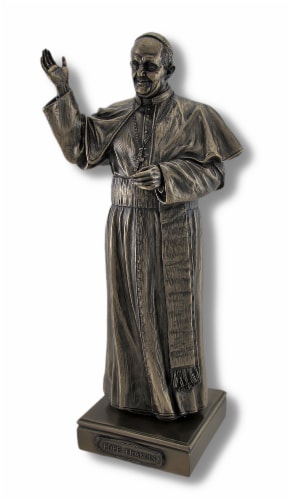 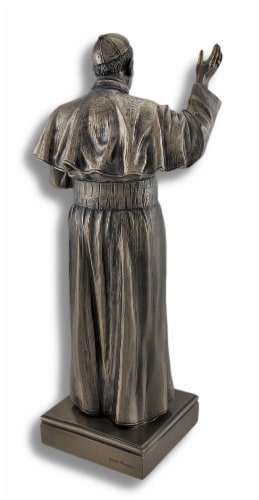 10 3/4 in. High, 3 3/4 in. Long, 3 1/4 in. Wide
Cold Cast Bronze
Expertly Detailed
Beautiful Bronze Finish
Brilliant Depiction
Born Jorge Mario Bergoglio, on March 13th 2013, Pope Francis became the 266th Pope of the Catholic Church. He was ordained a priest in 1969, and became Archbishop of Buenos Aires in 1998, and in 2001 he became a Cardinal. Pope Francis was elected as Pope by the papal conclave. Bergoglio chose the papal name Francis in honor of Saint Francis Assisi. This wonderful cold cast bronze statue represents this religious leader that is known for his humility, concern for the poor and commitment to dialogue as a way to build bridges between people. This expertly sculpted statue will stand tall in your home or office at 10 3/4 inches high, 3 3/4 inches long and 3 1/4 inches wide with its beautiful bronze finish. This piece boasts a felted bottom that will help prevent scratching delicate surfaces, and would make a wonderful Holiday gift for both fans and followers alike.