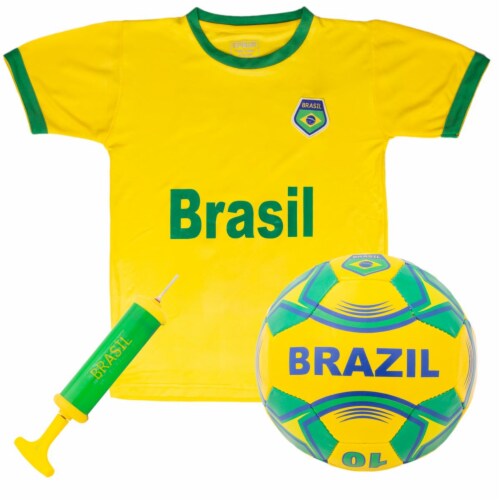 Verde Amarela Get ready to cheer on your country s team to glory while being kitted out in this fantastic full jersey and ball that celebrates the Brazil s National Team The Brazilian National team is legendary for its dribbling focused style that have earned them six appearences in the World Cup finals The team has also won 5 Copa Amrica titles as well as 3 titles in the South American Football Championships This Crown Sporting Goods product honors the team s heritage and includes one Brazil jersey with matching shorts that come adorned with the captain s number 10 on both the back and leg You ll also receive a ball that comes with a slick Brazil design and also has the number 10 incorporated in that design Kit comes in child s sizes ranging from Small Medium and Large Specifications . National Brazil. Age Group Kids. Weight 1 5 lbs