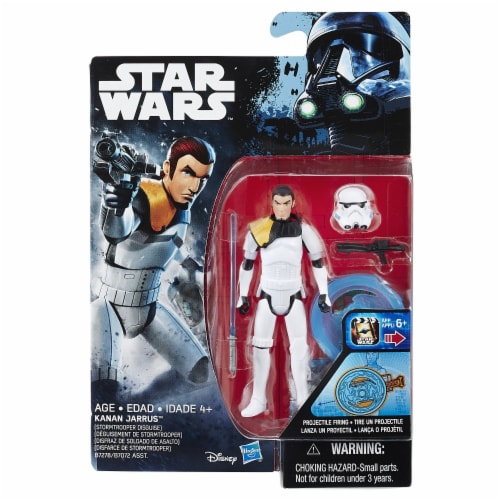 Enter the world of Star Wars and launch into action and adventure! Discover a galaxy of starships and vehicles, and get immersed in exciting stories of good versus evil against a backdrop of a universe populated by heroes and villains, droids and space creatures. Picture new galactic maneuvers and brace for mega lightspeed action with this 3.75-inch Kanan Jarrus (Stormtrooper Disguise) from Star Wars Rebels! One of the few surviving Jedi after the execution of Order 66, Kanan Jarrus went into hiding to escape the Emperor?s purge. He once again embraced his identity as a Jedi Knight, and became a leader among a small but determined band of rebel freedom fighters. He carries a lightsaber and a blaster, an uncommon practice for Jedi. Experience the journey of the Ghost Crew, the young and fearless Rebel Resistance group from Star Wars Rebels! Relive the daring action and excitement from the Star Wars universe with this 3.75-inch Kanan Jarrus (Stormtrooper Disguise) figure from Star Wars Rebels, and collect and do battle with these and other figures and vehicles from Hasbro Star Wars! Additional items sold separately. Hasbro and all related terms are trademarks of Hasbro. Star Wars products are produced by Hasbro under license from Lucasfilm Ltd.