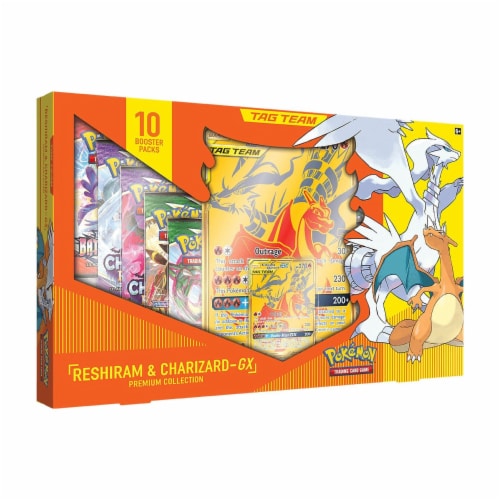 If you're looking to turn up the heat on your Pokémon TCG opponents, the Reshiram & Charizard-GX Premium Collection will bring the burn. This set, which is exclusive to Walmart stores, includes a gold foil version of Reshiram & Charizard-GX. This powerful pair has the Outrage attack, which grows more powerful as they take damage, and the Flare Strike attack, which does a massive 230 damage but cannot be used during your next turn. The biggest threat from this TAG TEAM Pokémon, however, their Double Blaze-GX attack. If they have three Fire Energy attached, the attack does an impressive 200 damage, but if you attach at least three additional Fire Energy, it will do another 100 damage—and this damage won't be affected by any effects on your opponent's Active Pokémon! In addition to this incredible card, this set also includes an oversize foil card of Reshiram & Charizard-GX, which will make a great display piece in your collection. There are also ten Pokémon TCG booster packs to help build a solid deck to support this terrific TAG TEAM Pokémon. With this pyrotechnic pair, you'll be ready to battle and win!