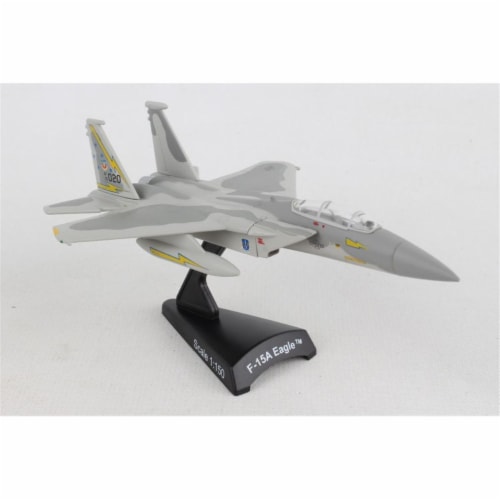 This Die cast metal airplane model comes in 1 150 scale with plastic stand The F 15 is an American twin engine all weather air superiority tactical fighter designed to gain and maintain superiority in aerial combat Designed by McDonnel Douglas now Boeing as a replacement for the F 4E Phantom the first flight occurred on July 27 1972 at Edwards AFB CA with the F 15 entering service in 1976 With its superior maneuverability acceleration range weapons and advanced avionics it is among the most successful model fighters with over 100 victories and no losses in aerial combat The 5th Fighter Interceptor Squadron was based out of Minot AFB ND flying F 15 s from 1984 to 1988 Its mission is to maintain interceptors and crews in a maximum state of readiness They were inactivated in July 1988 and was reactivated as the 5th Flying Training Squadron based out of Vance AFB OK in January 1990 This aircraft was allocated to the Imperial War Museum in Duxford UK on loan from the United States Air Force Museum Specifications . Length 5 3 8 . Wingspan Size 3 7 8 . Material Metal Plastic. Scale 1 150