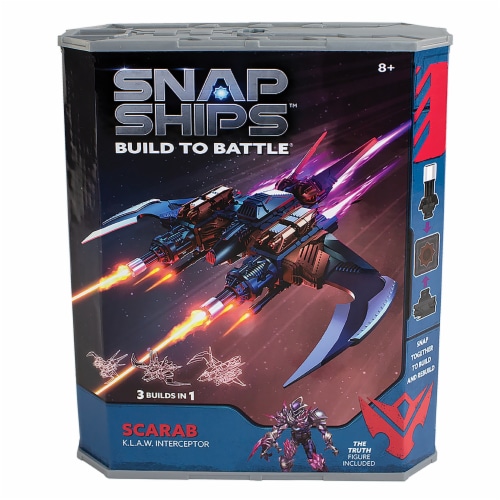 At its core, Snap Ships is a collectible, versatile, modular building system that allows kids to build multiple crafts. All of the sets are interchangeable so you can combine pieces to create different, larger builds. Each set has patent-pending cube pieces that snap together to be the core of the ship, allowing for versatile and quick builds that can be easily modified. Also included are unique pieces that differentiate sets from one another, offering different specs for play. Each craft features real shooting weapon play so kids can Build to Battle! Each package also features a plastic lid that is used as a stand when displaying ships when not playing.

The Snap Ships set for Scarab includes instruction for three different builds that you assemble yourself and then engage in battle with real shooting weapon play. Scarab, Interceptor, piloted by The Truth, the leader of the Komplex, is the main fighting ship for the Komplex, equipped with wings designed to cut through armor. Add the mysterious UJU tech piece that's included and the damage only intensifies.