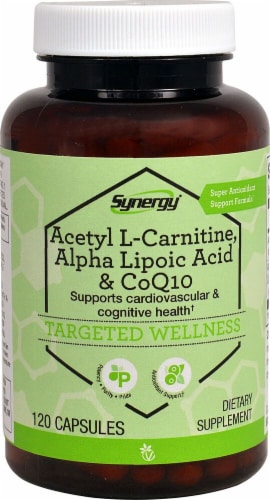 Coenzyme Q10 (CoQ10). CoQ10 is a fat-soluble, vitamin-like compound found in every human cell. It’s used by the mitochondria (“power plants”) of cells to produce energy. CoQ10 is found in highest concentration in cells of organs that require large amounts of energy, such as the heart. It also functions as an antioxidant. While the body produces CoQ10 on its own, levels decline over time, with a steady decrease beginning after age 30. Factors such as aging, genetics, and cholesterol-lowering statins can lead to a CoQ10 deficiency.

Alpha lipoic acid (ALA). ALA is a natural compound that functions as a co-factor in vital, energy-producing reactions.* The body produces very little ALA on its own, and it is difficult to obtain sufficient quantities from diet. ALA is well known as a powerful antioxidant.* It has been called a “universal antioxidant” because it is effective in water-based substances such as blood, while its reduced metabolite, dihydrolipoic acid (DHLA), is effective in fatty tissues and membranes.*

Acetyl L-Carnitine (ALC). ALC is the acetyl ester of carnitine, an amino acid derivative, and is distributed throughout the central and peripheral nervous system. Both ALA and ALC are known as mitochondrial antioxidants that can provide anti-aging nutrition.*