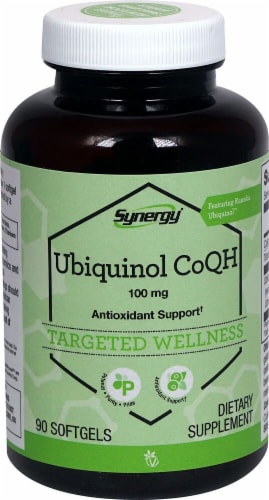 Ubiquinol CoQH is a new, stabilized form of coenzyme Q10 (CoQ10). CoQ10 is a fat-soluble, vitamin-like compound found in every cell of the body. It’s used by the mitochondria (“power plants”) of cells to produce energy. CoQ10 is found in highest concentration in cells of organs that require large amounts of energy, such as the heart.

What are the key benefits of Synergy Ubiquinol CoQH.

Synergy Ubiquinol CoQH is a targeted wellness solution - just for you.

Nutrition Facts
90.0 servings per container
Serving size
Amount per serving
Calories10
% Daily value*
Total Fat1g2%
*The % Daily Value (DV) tells you how much a nutrient in a serving of food contributes to a daily diet. 2,000 calories a day is used for general nutrition advice.